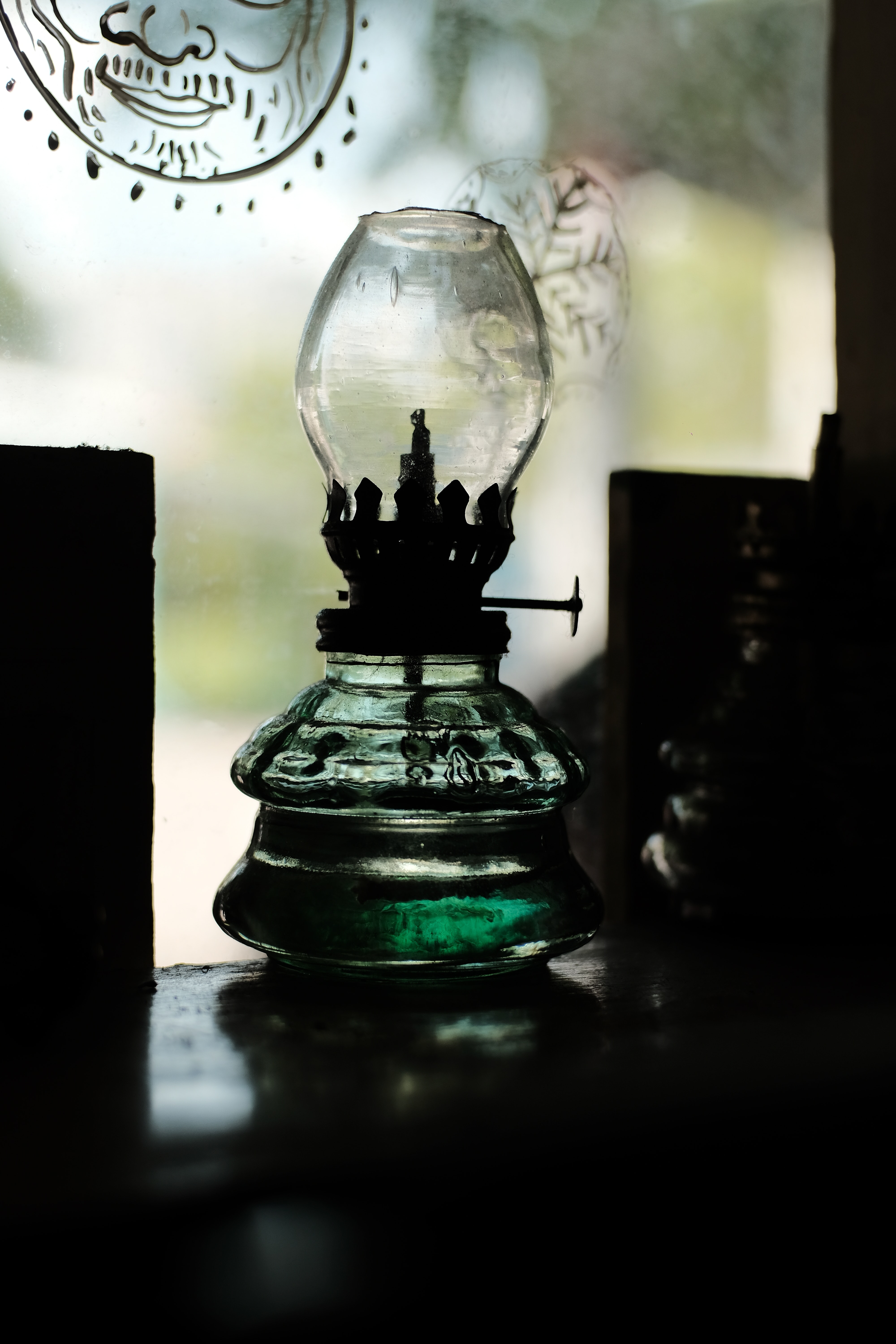 “And you shall command the children of Israel that they bring you pure oil of pressed olives for the light, to cause the lamp to burn continually. In the tabernacle of meeting, outside the veil which is before the Testimony, Aaron and his sons shall tend it from evening until morning before the Lord. It shall be a statute forever to their generations on behalf of the children of Israel.

And He said, “My Presence will go with you, and I will give you rest.”

Then he said to Him, “If Your Presence does not go with us, do not bring us up from here. For how then will it be known that Your people and I have found grace in Your sight, except You go with us? So we shall be separate, Your people and I, from all the people who are upon the face of the earth.”

So the Lord said to Moses, “I will also do this thing that you have spoken; for you have found grace in My sight, and I know you by name.”

And he said, “Please, show me Your glory.”

Then He said, “I will make all My goodness pass before you, and I will proclaim the name of the Lord before you. I will be gracious to whom I will be gracious, and I will have compassion on whom I will have compassion.” But He said, “You cannot see My face; for no man shall see Me, and live.” And the Lord said, “Here is a place by Me, and you shall stand on the rock. So it shall be, while My glory passes by, that I will put you in the cleft of the rock, and will cover you with My hand while I pass by. Then I will take away My hand, and you shall see My back; but My face shall not be seen.”

“When I passed by you again and looked upon you, indeed your time was the time of love; so I spread My wing over you and covered your nakedness. Yes, I swore an oath to you and entered into a covenant with you, and you became Mine,” says the Lord God.

For You meet him with the blessings of goodness;
You set a crown of pure gold upon his head.

Defend the poor and fatherless; Do justice to the afflicted and needy.
Deliver the poor and needy; Free them from the hand of the wicked.
They do not know, nor do they understand; They walk about in darkness;
All the foundations of the earth are unstable.

Enter into His gates with thanksgiving, And into His courts with praise.
Be thankful to Him, and bless His name.

Open to me the gates of righteousness; I will go through them, And I will praise the Lord.
This is the gate of the Lord, Through which the righteous shall enter.

The people who walked in darkness Have seen a great light; Those who dwelt in the land of the shadow of death, Upon them a light has shined.

Arise, shine; For your light has come! And the glory of the Lord is risen upon you.
For behold, the darkness shall cover the earth, And deep darkness the people;
But the Lord will arise over you, And His glory will be seen upon you.
The Gentiles shall come to your light, And kings to the brightness of your rising.

“You are the light of the world. A city that is set on a hill cannot be hidden. Nor do they light a lamp and put it under a basket, but on a lampstand, and it gives light to all who are in the house. Let your light so shine before men, that they may see your good works and glorify your Father in heaven.

“Therefore if they say to you, ‘Look, He is in the desert!’ do not go out; or ‘Look, He is in the inner rooms!’ do not believe it. For as the lightning comes from the east and flashes to the west, so also will the coming of the Son of Man be. For wherever the carcass is, there the eagles will be gathered together.

“Then the kingdom of heaven shall be likened to ten virgins who took their lamps and went out to meet the bridegroom. Now five of them were wise, and five were foolish. Those who were foolish took their lamps and took no oil with them, but the wise took oil in their vessels with their lamps. But while the bridegroom was delayed, they all slumbered and slept.
“And at midnight a cry was heard: ‘Behold, the bridegroom is coming; go out to meet him!’
Then all those virgins arose and trimmed their lamps. And the foolish said to the wise, ‘Give us some of your oil, for our lamps are going out.’
But the wise answered, saying, ‘No, lest there should not be enough for us and you; but go rather to those who sell, and buy for yourselves.’
And while they went to buy, the bridegroom came, and those who were ready went in with him to the wedding; and the door was shut.
“Afterward the other virgins came also, saying, ‘Lord, Lord, open to us!’
But he answered and said, ‘Assuredly, I say to you, I do not know you.’
“Watch therefore, for you know neither the day nor the hour in which the Son of Man is coming.

“No one, when he has lit a lamp, covers it with a vessel or puts it under a bed, but sets it on a lampstand, that those who enter may see the light. For nothing is secret that will not be revealed, nor anything hidden that will not be known and come to light. Therefore take heed how you hear. For whoever has, to him more will be given; and whoever does not have, even what he seems to have will be taken from him.”

“Strive to enter through the narrow gate, for many, I say to you, will seek to enter and will not be able.

Jesus said to him, “I am the way, the truth, and the life. No one comes to the Father except through Me.

And truly Jesus did many other signs in the presence of His disciples, which are not written in this book; but these are written that you may believe that Jesus is the Christ, the Son of God, and that believing you may have life in His name.

For as many as are led by the Spirit of God, these are sons of God. For you did not receive the spirit of bondage again to fear, but you received the Spirit of adoption by whom we cry out, “Abba, Father.” The Spirit Himself bears witness with our spirit that we are children of God, and if children, then heirs—heirs of God and joint heirs with Christ, if indeed we suffer with Him, that we may also be glorified together.
For I consider that the sufferings of this present time are not worthy to be compared with the glory which shall be revealed in us. For the earnest expectation of the creation eagerly waits for the revealing of the sons of God. For the creation was subjected to futility, not willingly, but because of Him who subjected it in hope; because the creation itself also will be delivered from the bondage of corruption into the glorious liberty of the children of God.

Now to Abraham and his Seed were the promises made. He does not say, “And to seeds,” as of many, but as of one, “And to your Seed,” who is Christ.

Therefore God also has highly exalted Him and given Him the name which is above every name, that at the name of Jesus every knee should bow, of those in heaven, and of those on earth, and of those under the earth, and that every tongue should confess that Jesus Christ is Lord, to the glory of God the Father.

And whatever you do in word or deed, do all in the name of the Lord Jesus, giving thanks to God the Father through Him.

And we urge you, brethren, to recognize those who labor among you, and are over you in the Lord and admonish you, and to esteem them very highly in love for their work’s sake. Be at peace among yourselves.
Now we exhort you, brethren, warn those who are unruly, comfort the fainthearted, uphold the weak, be patient with all. See that no one renders evil for evil to anyone, but always pursue what is good both for yourselves and for all.
Rejoice always, pray without ceasing, in everything give thanks; for this is the will of God in Christ Jesus for you.
Do not quench the Spirit. Do not despise prophecies. Test all things; hold fast what is good. Abstain from every form of evil.

Behold, He is coming with clouds, and every eye will see Him, even they who pierced Him. And all the tribes of the earth will mourn because of Him. Even so, Amen.

Do not fear any of those things which you are about to suffer. Indeed, the devil is about to throw some of you into prison, that you may be tested, and you will have tribulation ten days. Be faithful until death, and I will give you the crown of life.

Around the throne were twenty-four thrones, and on the thrones I saw twenty-four elders sitting, clothed in white robes; and they had crowns of gold on their heads.

When He opened the fifth seal, I saw under the altar the souls of those who had been slain for the word of God and for the testimony which they held. And they cried with a loud voice, saying, “How long, O Lord, holy and true, until You judge and avenge our blood on those who dwell on the earth?” Then a white robe was given to each of them; and it was said to them that they should rest a little while longer, until both the number of their fellow servants and their brethren, who would be killed as they were, was completed.

After these things I looked, and behold, a great multitude which no one could number, of all nations, tribes, peoples, and tongues, standing before the throne and before the Lamb, clothed with white robes, with palm branches in their hands, 10 and crying out with a loud voice, saying, “Salvation belongs to our God who sits on the throne, and to the Lamb!”

Then he said to me, “These words are faithful and true.” And the Lord God of the holy prophets sent His angel to show His servants the things which must shortly take place. “Behold, I am coming quickly! Blessed is he who keeps the words of the prophecy of this book.”

“And behold, I am coming quickly, and My reward is with Me, to give to every one according to his work. I am the Alpha and the Omega, the Beginning and the End, the First and the Last.”
Blessed are those who do His commandments, that they may have the right to the tree of life, and may enter through the gates into the city. But outside are dogs and sorcerers and sexually immoral and murderers and idolaters, and whoever loves and practices a lie.

He who testifies to these things says, “Surely I am coming quickly.”
Amen. Even so, come, Lord Jesus!